Why Learn About Marine Mammals?

Marine mammals have a special appeal and fascination for humans as they live in a different environment and most of their physiology and biology remains largely unknown. They are often portrayed as cute, adorable animals with human-like traits (e.g. Flipper/Keiko).
The reality is that they are highly intelligent, live in organized societies (e.g. Killer Whales), families (e.g. Dolphins), or as solitary animals (e.g. Polar Bears, Sea Otters, Baleen Whales) and have become adapted to an environment that is varied and harsh.
Numerous human activities have become a threat to their survival, which has resulted in a recent upsurge of interest in marine mammal science to help protect and preserve these animals if they are to survive.
In the broadest terms, a marine mammal is defined as any aquatic mammal that spends part or all of its life in water (fresh or salt). Currently, there are approximately 124 living species, including: 84 cetaceans (whales, dolphins, porpoises), 36 pinnipeds (seals, sea lions, walrus), 4 sirenians (manatees, dugongs), sea otters and polar bears. Also included are fresh water species, such as river dolphins (Hong Kong, Amazon River) and seals in the Caspian and Baikal seas.

Click below for mor information on each marine mammal of interest:

Whales, dolphins and porpoises are fully adapted to aquatic life, exchanging hair and hind limbs for a spindle-shaped body, blowhole, blubber and a tail featuring horizontal flukes. Most species are marine, freshwater dolphins being the exception. While sharing common characteristics, this group of mammals is one of the most distinct and specialised; it includes the largest mammal (the Blue Whale), well-known dolphins, tusked narwhals and singing humpbacks among others. Whales, dolphins and porpoises can be separated into two general categories depending on whether they employ teeth or instead filter their food from the water using baleen. Species employ a variety of communication and feeding strategies.

Whales, dolphins and porpoises all belong to the order Cetacea which is divided into two sub-orders: Mysticeti and Odontoceti. The former are baleen whales which lack teeth as adults, instead using keratin-based baleen plates to strain organisms from the water. Some well-known baleen whales are the blue, humpback and grey whales. Some Mysticetes communicate using complex songs, but they do not use echolocation. The Odontoceti are toothed whales, which employ teeth, that do use echolocation. Dolphins, porpoises and sperm whales all belong to this sub-group.

Whales range in size from 33 m (the Blue Whale) to 2.7 m (the Dwarf Sperm Whale). Whales can be very long-lived and may live more than a century depending on the species. 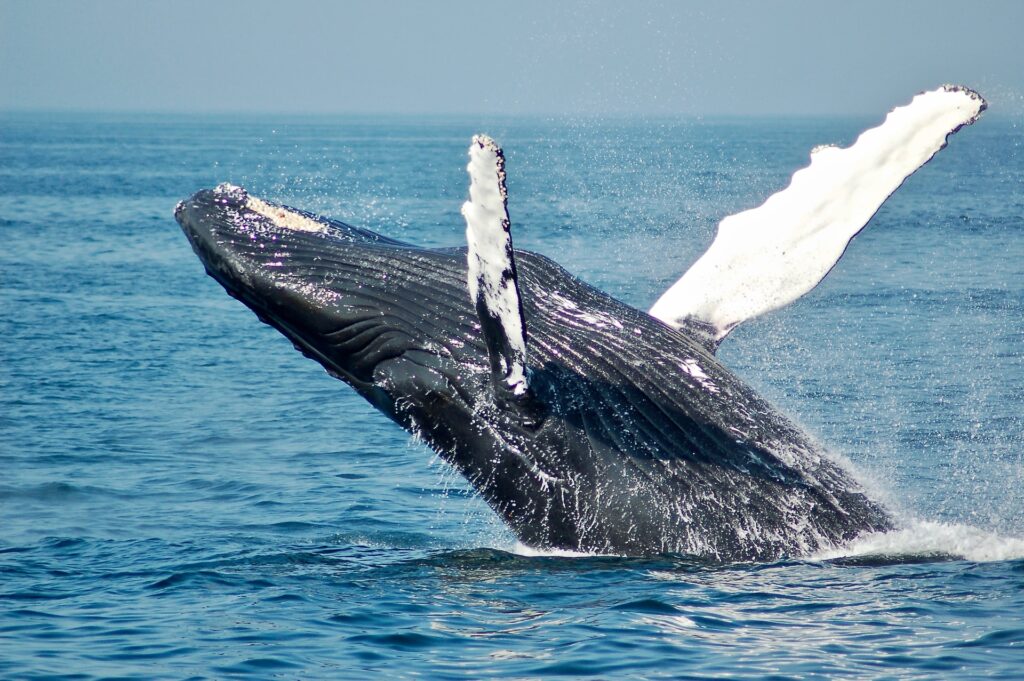 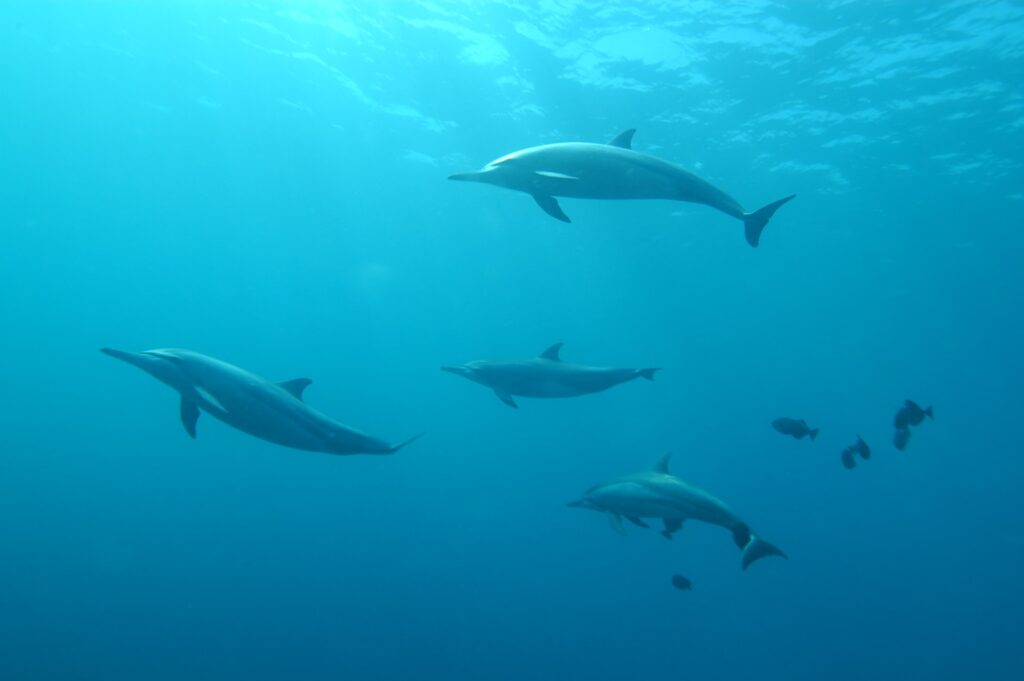 Dolphins belong to the families Delphinidae and Platanistoidea. They range in size from the over 9 m, 10 tonne Killer whale to the 1.2 m, 40 kg Maui dolphin. Dolphins are found worldwide and are often considered to be among the most intelligent animals. They are social and are often found in pods, communicating through clicks and whistles.

Porpoises belong to the family Phocoenidae. They are the smallest cetaceans, the smallest of which is the less then 1.5 m Vaquita. They have flattened, spade-shaped teeth as opposed to the conical teeth of dolphins.

Status: Whales, dolphins and porpoises face a variety of threats, many of them strongly influenced by humans. These include climate change, which particularly affects species such as the Bowhead whale that depend on Arctic waters. While some species are recovering, others are showing decline. According to the IUCN 2006 Red List, of those species evaluated, 2 species are critically endangered, 7 are endangered, 5 are vulnerable, 14 are conservation dependent and 1 is near threatened. In December 2006, the Chinese River Dolphin was declared functionally extinct. 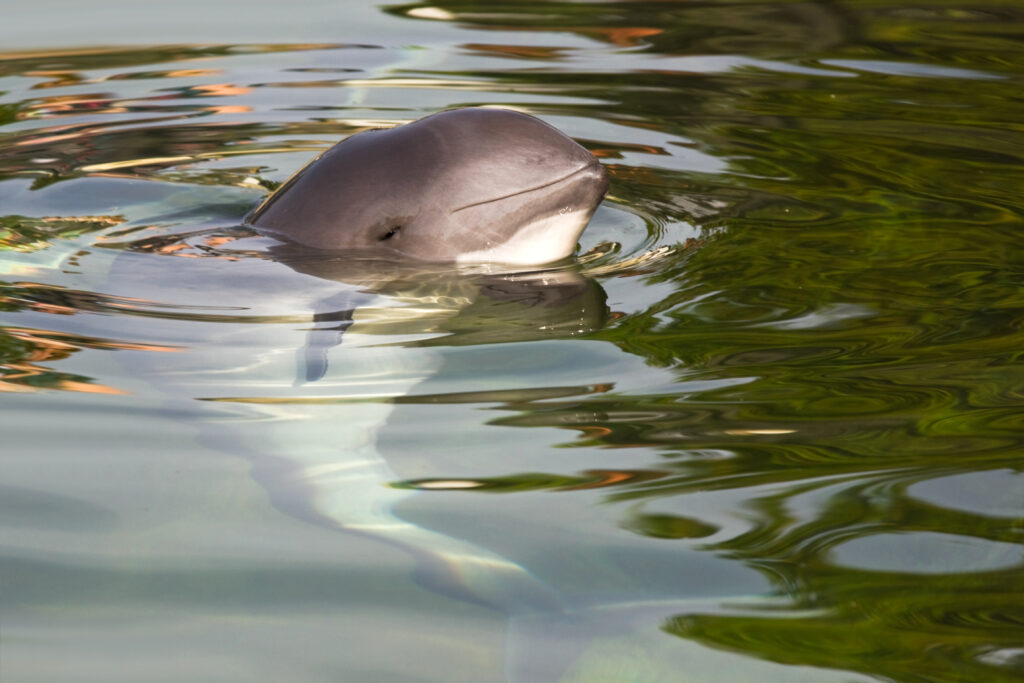 While most carnivores live on land, seals, sea lions and walruses have adapted to spending large amounts of time in the water. Unlike whales, dolphins and porpoises, this group spends at least part of its time on land or ice. Sea lions, seals and walruses can be distinguished from one another through a variety of physical and behavioural differences. They live in a variety of habitats ranging from polar to temperate while feeding on food ranging from krill to squid.

Sea lions, seals and walruses belong to the sub-order Pinnipedia. Like whales, they utilise a thick layer of blubber both for warmth and for streamlining.

They use their long front flippers to propel them in the water and can bring their hind flippers under their body, allowing them to “walk” on land.

They range in size from the 3.3 m Stellar sea lion to the less than 1.3 m Galapagos fur seal. 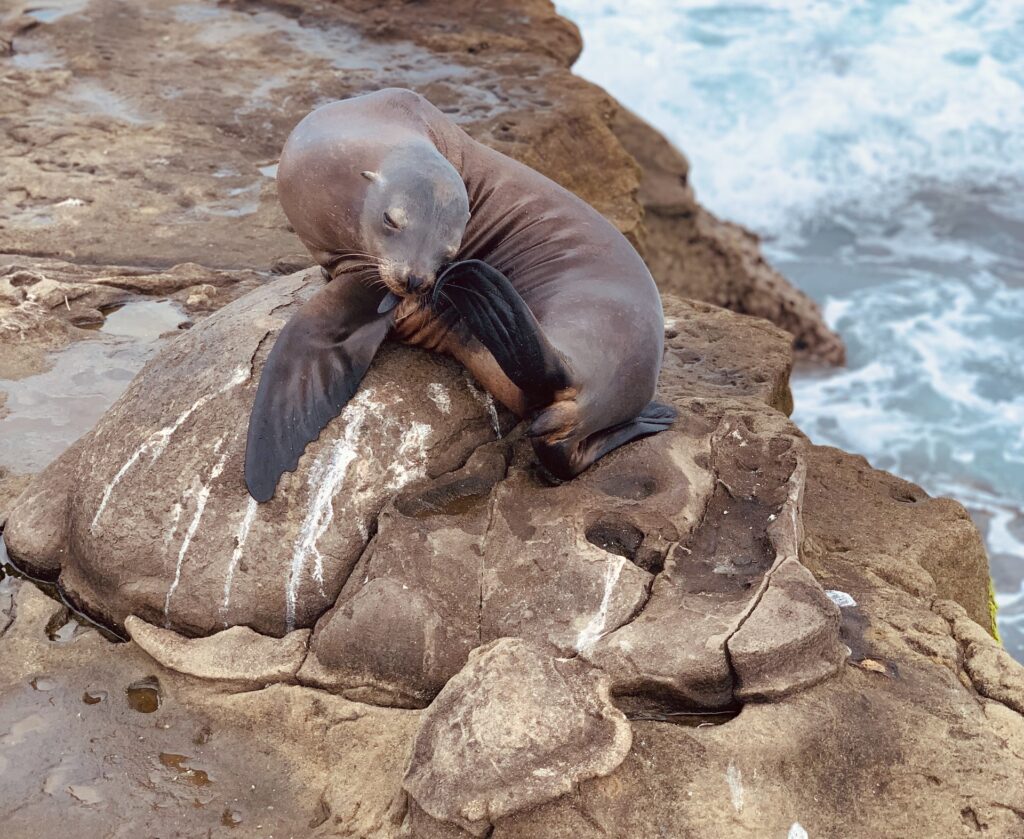 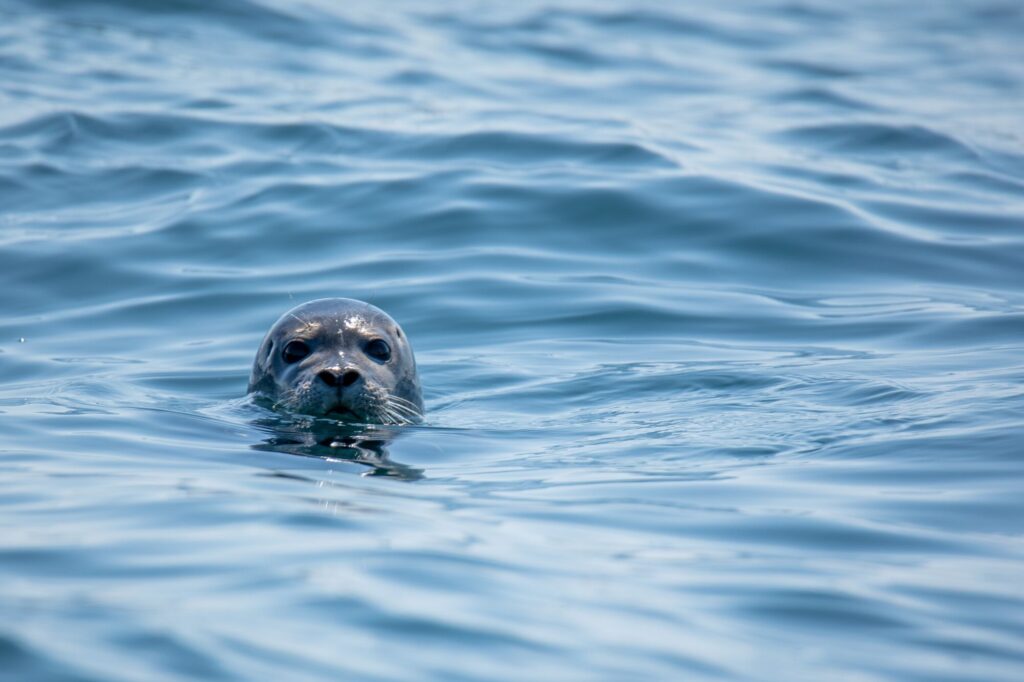 Other seals, also called “true seals” or “earless seals,” belong to the family Phocidae. As the name suggests, they have no external ears.

They are more adapted to aquatic life than sea lions and fur seals. They range in size from the 5 m Elephant seal to the less than 1.2 m Baikal seal.

The walrus is the sole member of the family Odobenidae. Like Phocids, they lack external ears; like Otariids, they can use their hind flippers to travel on land. In addition to blubber, they also have thick skin (reaching up to 4 cm). Both sexes grow tusks, used for fighting, display, and anchoring themselves to the ice.  Unlike the other pinnipeds, they lack visible fur. The walrus can grow to 4.6 m.

Status: Historically, commercial exploitation has driven many seal, sea lion and walrus species to the brink of extinction. Today, many threats such as pollution and entanglement continue to threaten populations. According to the 2006 COSEWIC report, of those species evaluated, 1 species is threatened and 2 species are of special concern within Canada. 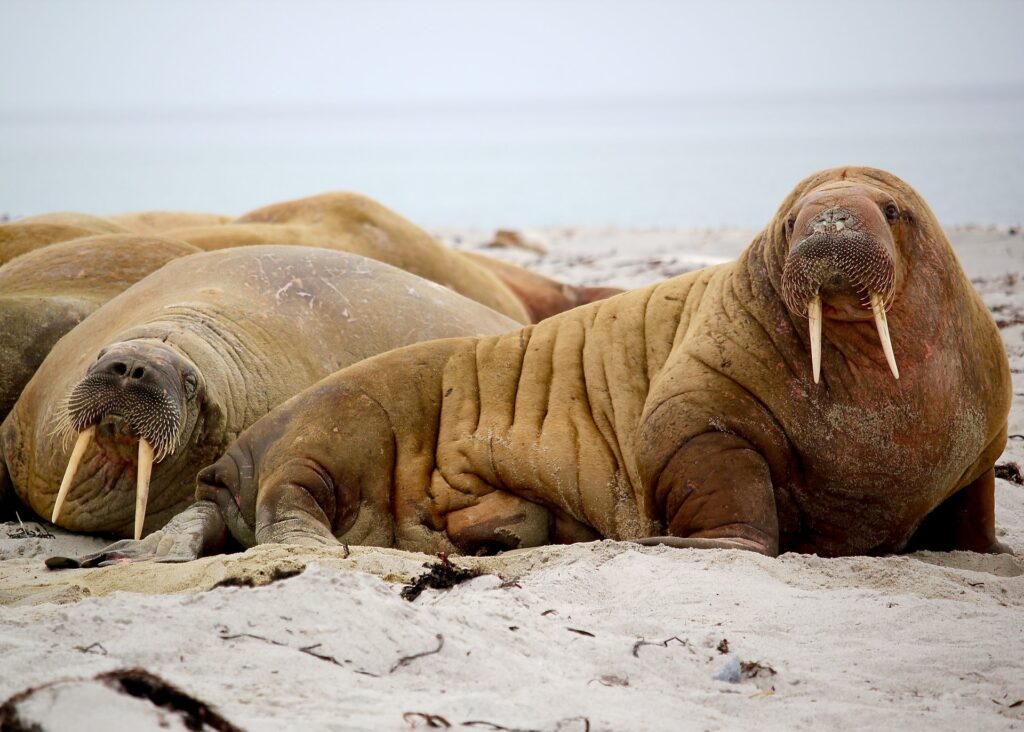 Manatees belong to the family Trichechidae. They have a large, paddle-shaped tail and have a prehensile upper lip that is used to gather food and also for communication. They can grow up to 3.6 m. As a manatee wears out its molars, they are replaced by new ones growing in from the back.

Only one species of dugong, Dugong dugon, remains. Most dugongs live in the northern waters of Australia. Unlike manatees, they have a fluked tail, incisor tusks and a sharply down-turned snout. They are usually smaller than manatees, but can reach 3 m. Also, they do not replace their teeth as manatees do.

Status: Manatees and dugongs are vulnerable to a variety of threats including over-harvesting and habitat destruction. Conflict with humans over coastal habitat threatens populations with greater risk of collisions with boats, pollution, and entanglement. According to the IUCN 2006 Red List, of those species evaluated, 1 species is extinct and 4 species are vulnerable. 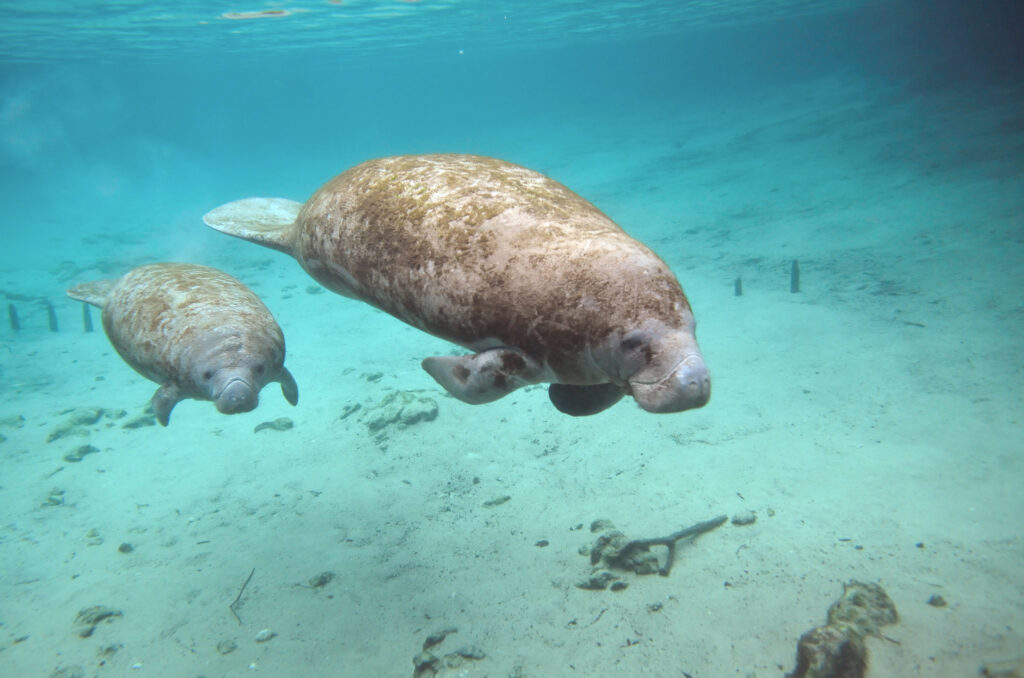 Sea otters are large otters found in the North Pacific Ocean, spending most of their lives at sea. They have long, streamlined bodies and extremely dense fur. They must consume large amounts of food per day and are often found floating on their backs in kelp forests as they eat and groom. They may either be solitary or congregate in groups.

Otters are part of the family Mustelidae and two species are considered marine mammals: Enhydra lutris (sea otter) and Lutra felina (marine otter). As they do not have a thick layer of blubber, they rely on very dense fur for retaining heat. They also have sebaceous glands that secrete a barrier between water and the skin. They have a special spinal column that allows for great flexibility. They have a high metabolism and consume between 20 and 25% of their body weight each day. The sea otter can reach up to 1.5 m while the marine otter is usually around 1 m.  Sea otters are also the only carnivore with less than four lower incisors. Sea otters are found in the North Pacific while the latter are found in southwest South America.

Status: Almost hunted to extinction for their fur, pollution, poaching and oil spills all continue to threaten sea otters. According to the IUCN 2006 Red List, the sea otter is endangered. 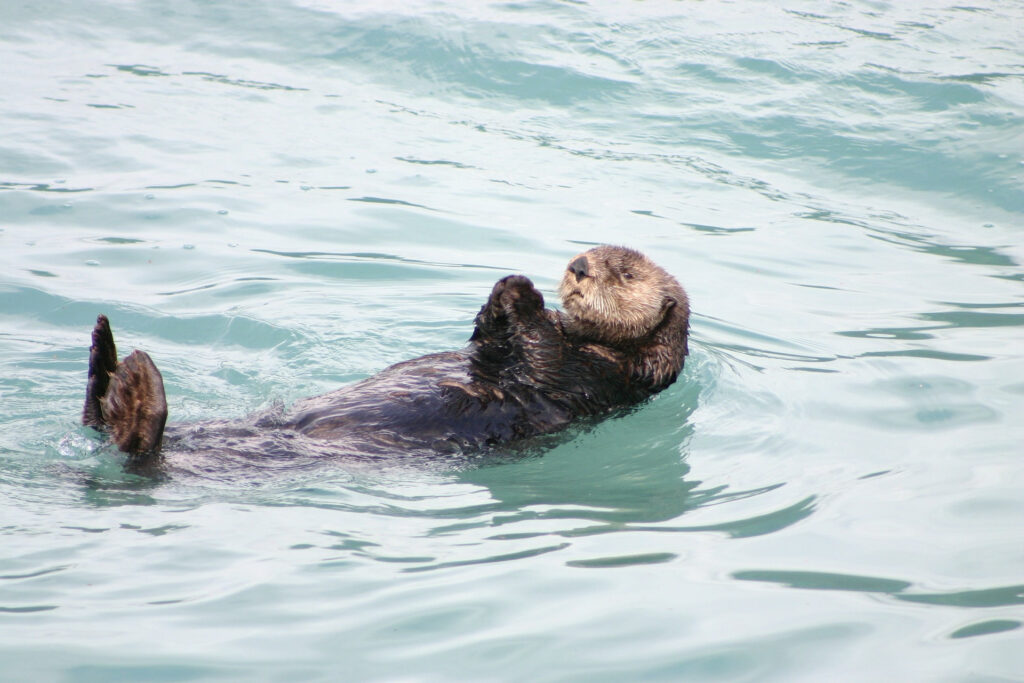 Polar bears are the only marine bear. They are semi-aquatic and spend much of their time on land and ice. As a result, they lack many of the adaptations to marine life found in other marine mammals. Their range is limited due to their dependence upon the availability of sea ice in order to hunt seals. Although they mostly feed on seals, polar bears will eat anything they can kill.

In addition to a thick layer of blubber, polar bears have a dense fur that is hollow and transparent, appearing white to provide camouflage. They also have black skin for absorbing sunlight. Their blubber also acts to aid buoyancy, augmenting the bears’ swimming ability. Polar bears are one of the largest land predators, reaching up to 3.3 m.

Status: While polar bears face a variety of threats, including pollution, most attention has been given to the habitat destruction caused by climate change and its drastic effect upon the sea ice. It is estimated that if global warming continues at the present rate, the species will become extinct within 100 years. According to the 2006 COSEWIC report, the polar bear is designated special concern.